Mr. Smith is a 48-year-old man with alcohol use disorder (AUD) and compensated cirrhosis who presented to the emergency department with alcohol withdrawal. He had been consuming one pint of vodka daily for the past three months but tried to quit. The next morning, he felt unwell and came to the hospital. On presentation, he was hemodynamically stable but was disoriented to time and complained of nausea, headache, and tremors. He appeared diaphoretic and had visible tremors in outstretched hands. Initial laboratory investigations showed stage 1 acute kidney injury, but were otherwise unremarkable, with normal transaminases. He received IV hydration and was started on symptom-based benzodiazepine protocol based on Clinical Institute Withdrawal Assessment of Alcohol (CIWA) scores.

Brief overview of the issue

AUD is prevalent in the U.S. with approximately one-fifth of persons aged 12 or older reporting binge alcohol use in the past month.1 Alcohol is also the most common cause of substance-related emergency department (ED) visits.2 Alcohol acts as a central nervous system depressant by increased release of gamma-aminobutyric acid (GABA) with its action on GABAA receptors and its antagonism at N-methyl-D-aspartate (NMDA) receptors.3 Withdrawal symptoms after discontinuation of alcohol use result from a decrease in GABA and an increase in NMDA pathway neurotransmission. Benzodiazepines are the first-line treatment for alcohol withdrawal syndrome (AWS) and are efficacious in reducing the severity of symptoms, delirium tremens, and seizures.4 However, commonly used benzodiazepine-only regimens require close monitoring and frequent redosing. Large cumulative total doses may be required to achieve sufficient symptom control, which increases the risk of adverse effects such as sedation or respiratory depression. Concurrent medical conditions, such as chronic liver disease which may coexist with AUD, may also limit the use of benzodiazepines in certain patients. Additionally, benzodiazepines alone may not adequately treat all symptoms in some episodes of AWS. Therefore, familiarity with other medications as alternative or adjunct therapy for AWS is beneficial for hospitalists.

Overview of the data 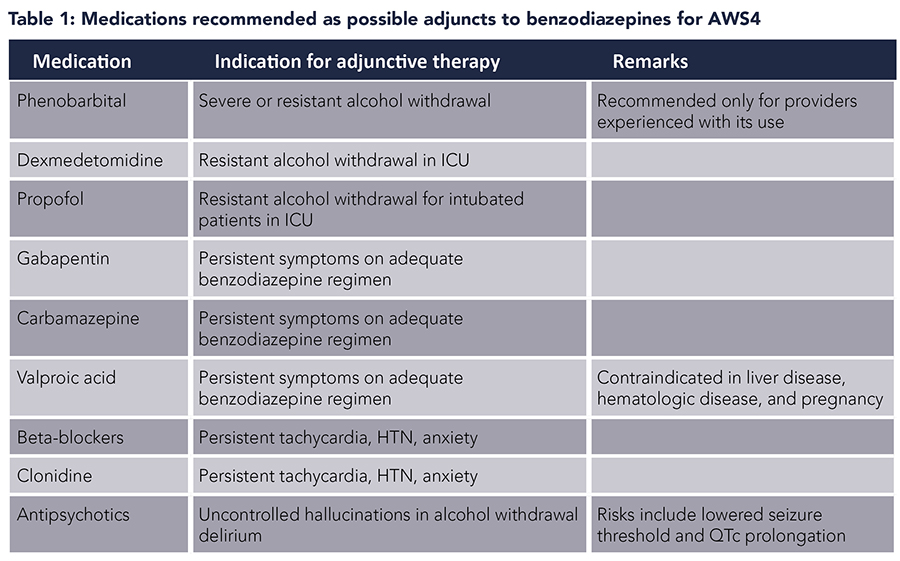 Gabapentin. Limited small-scale studies suggest that gabapentin may be efficacious in the management of mild AWS in ambulatory settings. Gabapentin may have benefits in terms of decreased daytime sedation and decreased alcohol craving.12 However, alcohol withdrawal seizures in patients treated with gabapentin have been reported in several studies.13,14 Therefore, gabapentin monotherapy should not be used in severe AWS or in those with a history of AWS seizures or who are at risk for progression to severe AWS. The use of gabapentin as an adjunct to symptom-triggered lorazepam was also not shown to improve outcomes in one open-label retrospective study.15

Dexmedetomidine. Dexmedetomidine is an intravenous central-acting alpha-2 adrenergic agonist which has been suggested as an adjunct to benzodiazepines in AWS in critical care settings. Besides producing light sedation without respiratory depression, dexmedetomidine has anxiolytic and sympatholytic properties that reduce autonomic hyperactivity, qualities that support its use in AWS. In patients with AWS and delirium, the addition of dexmedetomidine to benzodiazepine has been shown to decrease delirium severity.17 It may also reduce total benzodiazepine dose requirements in the short term, though the difference seems to be lost when analyzed over the total duration of hospital stay.18 Dexmedetomidine may also decrease the need for mechanical ventilation and associated complications such as nosocomial infections.19 The effect on length of stay is debatable with some studies reporting shorter ICU and hospital stays, whereas others noted longer hospital stays.19,20 An important consideration would be cost and resource utilization since it can only be used in a critical care setting. With current evidence, the use of dexmedetomidine seems beneficial in a select group of patients in a critical care setting with severe AWS, or in those with delirium, to decrease the need for mechanical ventilation due to high benzodiazepine requirements.

Propofol. Propofol is a dose-dependent sedative-hypnotic with agonism of GABA receptors through a site different from that of benzodiazepines, and inhibition of NMDA subtype of glutamate receptor. Due to its mechanism of action, propofol has been used in AWS in critical care settings as an adjunct to benzodiazepines. In patients with refractory AWS, the addition of propofol is associated with decreased benzodiazepine dose requirement. Studies have reported similar or increased duration of mechanical ventilation, time to resolution of symptoms, and ICU stays with propofol adjunct.21 Thus, propofol may be beneficial as an adjunct in a select group of patients with AWS refractory to benzodiazepines who are in a critical care setting and requiring mechanical ventilation, or if other adjuvant medications are contraindicated. Hypotension, hypertriglyceridemia, and propofol-related infusion syndrome are possible adverse effects of propofol use.

Beta-blockers and clonidine. Beta-blockers and the alpha-2 agonist clonidine may be a reasonable adjunctive treatment for the management of persistent tachycardia and hypertension for patients who are adequately treated with benzodiazepines and who have received adequate fluid and electrolyte replacement.4 These medications may improve anxiety as well. Neither of these medication classes is adequate as monotherapy.

Valproic acid. Valproic acid is not recommended as a monotherapy for alcohol withdrawal due to insufficient evidence.22 It can be used as an adjunctive treatment to benzodiazepines.4 Its use is contraindicated in the setting of liver disease, hematologic disease, and pregnancy.

Baclofen. Baclofen is not recommended for the treatment of AWS.4 A systematic review of randomized controlled trials yielded no conclusions regarding the use of baclofen for AWS.23

Ethanol. The efficacy of ethanol for treating AWS is unknown, and it has recognized adverse effects. Ethanol is not recommended for the treatment of AWS.4

Application of the data to the original case

Based on his CIWA scores, Mr. Smith received 75 mg oral chlordiazepoxide, and subsequently also received 1 mg intravenous (IV) lorazepam. He became somnolent but arousable, though he seemed to be oriented only to self. Due to his cirrhosis and concern for poor clearance of benzodiazepine, the CIWA-based benzodiazepine protocol was discontinued, and he received IV phenobarbital 260 mg followed by IV phenobarbital 130 mg at re-evaluation in one hour. On subsequent evaluations, Mr. Smith’s symptoms improved. The next day he noted the resolution of all symptoms but started to have alcohol cravings and requested medications for craving control to assist with alcohol abstinence. He was provided with a prescription for gabapentin and was discharged with a planned follow-up with a primary care provider. Of note, on his previous admissions for alcohol withdrawal, he had been treated with the CIWA-based benzodiazepine protocol and had a longer length of stay in hospital (three to seven days).

The use of alternative and adjuvant drugs to benzodiazepines may be considered in select patients with alcohol withdrawal syndrome.

A 43-year-old female with a past medical history of alcohol use disorder presents to the emergency department with tremors and malaise after discontinuing her usual alcohol intake of eight beers daily. She is diagnosed with alcohol withdrawal syndrome and treated with a symptom-triggered benzodiazepine regimen, thiamine, and intravenous fluids. She develops alcohol withdrawal delirium with significant agitation. What is the best next step in management?

a. Switch to phenobarbital monotherapy