A 57-year-old female with a history of hypertension and diabetes mellitus presented to the emergency department with complaints of chills, fever, and productive cough progressively worsening over the last five days. A physical exam revealed a well-nourished woman with mild respiratory distress and was remarkable for rhonchi heard on auscultation at the left lung base. Her blood pressure was 124/73 mm Hg, heart rate was 112 beats per minute, respiratory rate was 24 breaths per minute, and temperature was 101.2 Fahrenheit. Lab work revealed leukocytosis with bandemia. A chest X-ray reported an infiltrate in the lower lobe of the left lung. She was admitted to the hospital for sepsis secondary to left lower lobe community-acquired pneumonia and started on the third-generation cephalosporin ceftriaxone 2 g intravenously, and oral azithromycin 500 mg daily. Subsequently, the patient developed right upper quadrant abdominal pain, and ultrasound revealed biliary tract sludge.

What is most likely the cause of the patient’s abdominal pain? 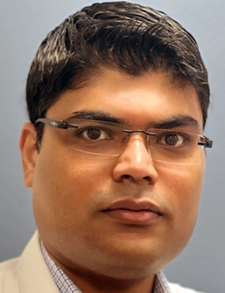 Ceftriaxone is one of the most used third-generation cephalosporins in the hospital setting. It can bind to the calcium in bile, forming ceftriaxone crystals in the biliary tract and leading to the syndrome called biliary pseudolithiasis,1 which can present as biliary colic. Most cases are self-resolving with the discontinuation of ceftriaxone. Misdiagnosis of this condition can lead to unnecessary invasive procedures and prolonged hospital stays.

Ceftriaxone is the first-line treatment against community-acquired pneumonia and gonorrhea, combined with azithromycin. Ceftriaxone and cefotaxime can cross the blood-brain barrier, and they’re recommended as an empirical treatment for bacterial meningitis along with vancomycin.2

Ceftriaxone is associated with adverse effects such as toxic epidermal necrolysis or Stevens-Johnson syndrome. Ceftriaxone-induced encephalopathy featuring limb numbness or weakness, behavioral problems, and memory impairment has been reported.

Ceftriaxone is contraindicated in neonates with jaundice as it has the affinity for binding to albumin by replacing bilirubin and may lead to bilirubin encephalopathy. Ceftriaxone is contraindicated in neonates expected to receive any calcium-containing products, as it can precipitate in their lungs and kidneys by reacting to calcium-containing solutions, which could be life-threatening.

What is the mechanism of action of cephalosporins?

Cephalosporins are similar to beta-lactam antibiotics which inhibit the synthesis of the bacterial cell wall, particularly peptidoglycan, the exoskeleton of bacteria that provides structural integrity and shape to bacterial cells and protects them from bursting.

Cephalosporins are classified into first through fifth generations based on the timeline of drug development and their antimicrobial properties.4 Moving from the first generation to the third, the microbicidal activity of cephalosporins increases against gram-negative bacilli but decreases against gram-positive organisms. Strikingly, the resistance against beta-lactamases surges from the first generation to the fifth.

In the case outlined above, ceftriaxone was discontinued due to probable biliary pseudolithiasis. The patient’s clinical status worsened, and her respiratory culture test returned positive for Pseudomonas aeruginosa, resistant to anti-pseudomonal penicillins.

Which other cephalosporins can be used to treat the patient?

Ceftazidime is an effective medication for severe infections caused by Pseudomonas aeruginosa, especially if the patient is allergic to penicillin or the organism is resistant to penicillin. Ceftazidime is also utilized as an inhalational agent in bronchiectasis, ventilator-associated pneumonia, and post-transplant airway infections.

Ceftazidime, in combination with avibactam (beta-lactamase inhibitor), is reserved for infections with carbapenem-resistant Enterobacterales and extensively drug-resistant Pseudomonas aeruginosa infections as seen in cystic fibrosis patients.

Cefepime is the fourth-generation cephalosporin active against Pseudomonas aeruginosa. It has better penetration through the outer membrane of gram-negative bacteria and a lower affinity than the third-generation cephalosporins due to a positively charged quaternary ammonium attached to its dihydrothiazone ring. Cefepime has similar activity to cefotaxime and ceftriaxone against pneumococci and methicillin-susceptible Staphylococcus aureus (MSSA). It is active against the Neisseria, Enterobacteriaceae, and Haemophilus influenzae and has greater activity against the gram-negative enterics that have a broad-spectrum, inducible, chromosomal AmpC beta-lactamase (Citrobacter, Enterobacter, indole-positive Proteus, and Serratia species).5

What are the risk factors associated with toxicity due to cefepime?

Severe neurotoxicity has been reported with cefepime use, including aphasia, encephalopathy, myoclonus, seizure, opsoclonus, and nonconvulsive status epilepticus.

The mechanism of the toxicity is not fully understood but may be associated with concentration-dependent gamma-aminobutyric acid-mediated neurotransmission resulting in a decreased seizure threshold.6 Risk factors associated with neurotoxicity are renal impairment, excessive dosing, and pre-existing brain injury. The neurotoxicity will potentially subside within days after discontinuation of therapy.

Other adverse effects include superinfection (particularly with enterococci or Candida)7 and elevated international normalized ratio.

The creation of three fifth-generation cephalosporins has made a significant evolution in the last decade (ceftaroline, ceftobiprole, and ceftolozane)

Ceftaroline is a fifth-generation cephalosporin with a higher affinity for penicillin-binding protein (PBP2a) in MSSA. It has activity against MSSA, as well as vancomycin-intermediate Staphylococcus aureus (VISA) and hetero-VISA.

Ceftaroline has activity for Streptococcus pneumoniae which is resistant to ceftriaxone or penicillin. Ceftaroline is not active against enterococci, extended-spectrum beta-lactamase (ESBL)-producing or AmpC-overproducing Enterobacteriaceae, Pseudomonas aeruginosa, Acinetobacter baumannii, or Bacteroides fragilis.

The U.S. Food and Drug Administration (FDA) approved a label expansion for treating Staphylococcus aureus bacteremia associated with skin and soft tissue infections in adults in 2015 and in the pediatric population in 2016.8 It is indicated for the treatment of acute bacterial skin and skin structure infections and community-acquired bacterial pneumonia caused by designated susceptible bacteria.

Ceftolozane-tazobactam is a combination of the renowned beta-lactamase inhibitor tazobactam and an innovative anti-pseudomonal cephalosporin. The FDA has approved its use for complicated urinary tract infections including pyelonephritis, hospital-acquired and ventilator-associated pneumonia, and infectious disease of the abdomen in combination with metronidazole.9

Ceftobiprole is a cephalosporin available in some European countries and Canada (but not the United States) that is also capable of binding to PBP2a, the protein conferring Staphylococcus aureus resistance to beta-lactam antibiotics.10

Cefiderocol is a siderophore cephalosporin reserved for patients with or at risk for infections with multidrug-resistant gram-negative bacteria, including ESBL- or carbapenemase-producing organisms, and multidrug-resistant Pseudomonas aeruginosa, Acinetobacter baumannii, Stenotrophomonas maltophilia, and Burkholderia cepacia.11

Cefiderocol has a novel mechanism for transport across the outer membrane that overcomes the effect of membrane permeability mutations, as seen with Pseudomonas aeruginosa.12 Cefiderocol is thought to have poor anaerobic and gram-positive activity.

In the U.S., cefiderocol has been approved by the FDA for use in adults with complicated urinary tract infections (including pyelonephritis) and hospital-acquired or ventilator-associated pneumonia due to otherwise highly resistant gram-negative bacteria when there are no alternative treatment regimens.

What is the mechanism of antibiotic resistance to cephalosporin and how can we combat it?

Antibiotic resistance occurs due to inappropriate prescribing, overuse, and agricultural use, and it’s one of the biggest public health challenges, according to the Centers for Disease Control and Prevention.

Enterobacteriaceae use the overexpression of AmpC cephalosporinase and the production of ESBL-E. Though these mechanisms are exclusively encountered in the hospital setting, there is increasing evidence of EBSL-producing strains in the community. Haemophilus parainfluenza uses PBP3 and PBP5 substitution as the mechanism of resistance.

Antimicrobial stewardship programs based on prospective audits, preauthorization, guidelines, and feedback systems are mandatory to encourage the judicious use of antibiotics. Effective communication among interprofessional and hospital supervisory authorities in reporting peculiar clinical presentation of an infectious pathogen and any new resistant organisms may lead to efficient patient care, tackle healthcare costs, and aid in the evolution of novel therapies.

Strategies to combat antibiotic resistance include developing algorithms and flowcharts based on clinical presentation, presumptive diagnosis, susceptibilities of the causative organism, contra-indications of the medications, and potential drug interactions.

Emphasis on following culture and sensitivity results and de-escalating antibiotic regimens when appropriate is vital to developing an Antibiotic Stewardship Program.

Patient education is paramount, and it is crucial to complete the entire course of antibiotics to eradicate the pathogen and avoid developing treatment failures or resistance.

Dr. Gujarathi is a hospitalist for Sound Physicians at the University of Florida Health in Jacksonville, Fla.