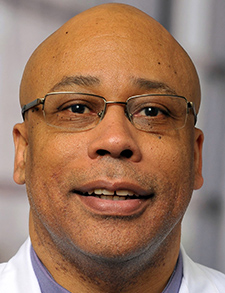 The billboard loomed above the road in Savannah, Ga., with three huge faces in medical masks peering out.

“All Cardiothoracic Surgeons Look Like This,” it read. All the faces were male and white.

What was a Black girl who lived nearby, and saw this billboard every day, supposed to think?

Quinn Capers, MD, an interventional cardiologist, and professor of internal medicine at the University of Texas Southwestern Medical Center in Dallas, asked the audience this at a session on implicit bias at SHM Converge.

“They see images like this enough, their unconscious mind will say, ‘This is the truth about the world in which we live,’” he said. “And it could be that because of that, the idea of becoming a cardiothoracic surgeon will never enter their developing brain.”

Images and messages like this—bombarding people through billboards, movies, and the news—create biases that make it less likely that we’ll treat certain groups of people fairly. And we’re powerless to keep these kinds of “implicit biases” from forming. But there are ways to resist, said Dr. Capers, who studies and frequently lectures about implicit bias.

“We all have it—that’s how the brain works. We all have implicit biases based on what we see—height, age, gender, gender identity, our perception of somebody’s religion, race, skin tone within a race,” Dr. Capers said. “The good news is, that it actually is quite easy to consciously override your implicit biases so that they don’t impair your ability to treat people fairly.”

His talk was replete with examples of implicit bias in our culture that shape our way of thinking without us even realizing it and examples of research offering evidence that this bias is very real. He also pointed to findings that show that training can help.

In one study, which he helped lead, a medical-school admissions committee was trained on how to mitigate implicit bias.1

“The next class was the most diverse in the history of that medical school,” Dr. Capers said.

In another, University of Wisconsin academic departments in STEMM—science, technology, engineering, math, and medicine—were randomized either to receive implicit bias training or not. Those that received the training had an increase in women in those departments compared to those that didn’t.2

Dr. Capers shared one example that showed how bias was even woven into the training at an academic medical center. In an online module used for re-credentialing that he once took, he was asked about this scenario: If you’re in an elevator with someone who seems nervous, is wearing clothes that seem unusually heavy for the summer, and starts telling you without prompting why he is at the hospital, and you both exit on the same floor, should you call security?

Dr. Capers said his answer was “no.” The creators of the test considered that the wrong answer.

Even at a very early age, people can be profoundly influenced by these unintended messages, Dr. Capers said. In a well-known study known as the “doll test” study, Black children are shown two dolls that are identical except that one doll is Black and the other white, and they are asked questions such as which one is the pretty doll, and which is the good doll. The children repeatedly favor the white doll. The study, originally performed in the 1940s, has been repeated with similar results through the years into modern times. In one clip, a Black girl who has favored the white doll is asked which doll she looks like, and she hesitates before choosing the Black doll.

“Her little mind has already incorporated these facts: that white is good, and Black is bad, and I’m Black therefore I must be bad,” he said.

Doctors aren’t immune to these biases, Dr. Capers said. Studies have found similar degrees of bias among physicians as among the general population, he said.3

And patients tend to notice, even if the physicians are not aware, he said.

“Try to remember that time when you saw a patient and came out of the room and you said, ‘I don’t know why, we didn’t really connect,’” he said. “It could be that you were interacting with someone from a group against which you unknowingly are unconsciously negatively biased.”

These biases can have meaningful impacts on patients, he said.

“At the time of this critical conversation, if you were the patient, would you want your doctor to be facing you? Or hold your hand? Or look you in the eye?” Dr. Capers asked. “This study suggests if you’re Black and your doctor is white, that might not happen. I hope that upsets you because that upsets me. One of the reasons it upsets me is because I know those doctors are good people, they’re humanitarian just like me and you, and they’re not aware of this. They think they treat everybody the same. This is the power of unconscious bias.”

He offered these research-based ways to combat implicit bias: Ask people about common interests; consciously make an effort to have the perspective of the group against which there is a bias; when data seems to point to one conclusion, “consider the opposite” conclusion before making a decision; and spend time with people you admire who belong to the groups against which you have a bias.