In the late 1990s, when  Robert Wachter, MD, found that his vision of and advocacy for the hospital medicine field was starting to get publicity, his father told him about a tennis game he’d played in Florida.

One of the players in his game was a doctor. 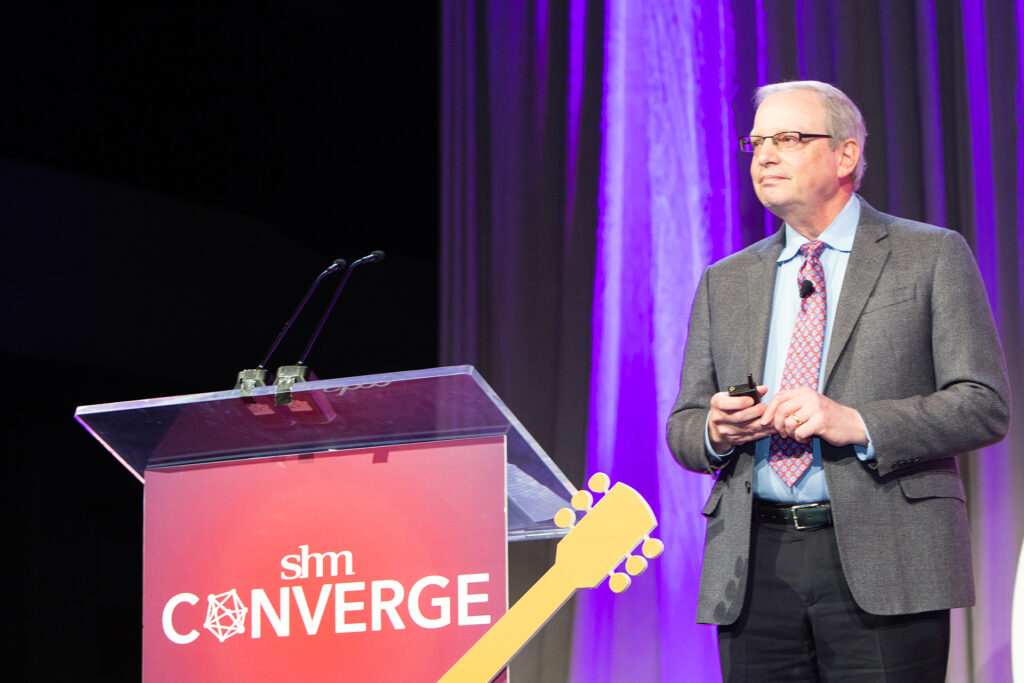 Dr. Wachter talked about the past, present, and (bright) future of the specialty as HM enters its second quarter century.

His father said he told the doctor who his son was, “and the doctor said he had heard of me,” Dr. Wachter, chair of internal medicine at the University of California, San Francisco, recalled in a keynote address at SHM Converge.

“I sat there and I kind of puffed my chest out and said, ‘That’s pretty cool,’” he said. But then his dad added, “He hates you.”

The very idea of a “hospitalist”—the word Dr. Wachter thought up to describe doctors who would care exclusively for hospitalized patients—brought fierce resistance from many primary care physicians, who were not eager to hand off care of their patients at their sickest moments, and who relied financially on caring for patients in the hospital.

In his plenary talk, Dr. Wachter retraced the history of hospital medicine’s origins, not only to show how far the field has come, but also to show how these strides were made in response to the realities of medical care 25 years ago, and how hospital medicine will need to continue to respond to today’s and tomorrow’s realities to continue to thrive.

“If there’s a system that hasn’t changed in 20 years, it’s got to be wrong,” he said. “It’s that way because of inertia.”

Eventually, primary care physicians came to accept hospitalists. After all, Dr. Wachter said, increasingly short lengths of stay and care for more people in the outpatient setting meant that primary care physicians were no longer making the trip to the hospital for say, 10 patients, but maybe just a few. And the expertise of hospitalists to manage the often-complex care of people in the hospital made sense from an outcome and financial standpoint, resulting in even shorter stays and better bottom lines for hospitals.

The impact of hospitalists has been seen during the pandemic, he said.

“Let me thank all of you for what you’ve done over the past two years. It’s remarkable how the folks here were at the front lines taking care of patients under the most extraordinary circumstances, and you’ve made an immense amount of difference,” he said. “If anyone doubted our indispensability, COVID-19 should have silenced them, big time.”

He predicted that less money will be spent on medicine in the U.S.—a fifth of the gross domestic product (GDP) is spent on health care now. He predicted this only with “some” confidence, though.

Hospitals will function in much the same way airlines do, he said. Because of low profit margins and high fixed costs, nearly full capacity will be needed for them to be viable, and the goal of hospitals will be patients with more complex conditions will be filling the beds, he said.

“If a hospital is 100% full from an economic standpoint, and there’s a complex surgical patient who could come in to get neurosurgery at a place like mine, or a liver transplant, and can’t get in because my patient with pneumonia is taking up a bed, that’s bad economically for the hospital, and the hospital is under considerable pressure to change that dynamic,” he said.

This raises the prospect of an increasing role for hospital at home care. Up until now, the complexities of arranging such care—lining up transportation, IV, medications, labs—have been a deterrent. This is why the concept didn’t take off in the way that hospital medicine did, even though it was introduced at about the same time as the hospitalist concept, Dr. Wachter said.

“We have to create a system in which it is as easy to admit to hospital at home as it to the ward,” he said. “That’s going to require a turnkey solution,” likely a company that takes care of all those tasks. Mayo Clinic and Kaiser Permanente recently made a $110 million investment in the home acute care company, Medically Home.

“If it’s ever going to hit a tipping point, it’s going to be now,” Dr. Wachter said. Who would provide this care is “up for grabs”—hospitalists, general internists, and geriatricians are all possibilities—and “I think it’s going to be important to be strategic about that as a field.”

He had a favorable outlook for the stability of the hospitalist field. While there might be pressure for increased efficiency, increasing patient censuses and hospitalist workload could lead to suboptimal care and longer lengths of stay, which would be a losing proposition for hospitals, he said.

Being replaced by less expensive health care professionals also likely isn’t a viable option, he said, because the knowledge of hospitalists will be needed to care properly for the more challenging patients who will be receiving care in the hospital rather than in the outpatient setting or at home.

“There are fewer stereotypical patients who are there under a protocol,” Dr. Wachter said. “We need to be indispensable. We need to be in a position where the hospital says: ‘Yeah they cost a lot of money, but they are really worth it. We could not run a hospital if not for them.’”

As for changes on the digital front, he said he doesn’t see that as a threat to hospitalists, given the complex and dynamic nature of the work. But he does predict that artificial intelligence could lead to phenomena such as a voice-activated medical coach or a digital system that reads an ECG or a chest X-ray.

“The field continues to grow exceptional clinicians,” he said. “I think the future is really bright.”