Brief overview: LTBI is the result of a delayed cell-mediated immune response that forms granulomas around sites of primary TB, preventing the further progression of primary TB disease. However, mycobacterium tuberculosis (mTB) bacilli can remain dormant in these granulomas for years, and 5-10% of affected patients go on to develop reactivation TB, mostly within the first two years of LTBI.1 In the U.S., 77% of active TB cases are thought to be due to reactivation.2

One of the most common tests used for the diagnosis of LTBI is an interferon-gamma release assay (IGRA). IGRAs measure the TB-sensitized–T-cell mediated release of interferon-gamma in response to certain mTB bacilli antigens, with some cross-reactivity to a few non-mTB antigens. IGRAs are unaffected by prior BCG vaccination and most non-tuberculous bacteria.3 IGRAs are preferable to tuberculin skin tests (TST) in BCG-vaccinated populations.

Whom to test: Diagnosing and treating LTBI reduced the five-year progression to active TB from 14.3% to 3.6% in one study.4 LTBI testing should be performed in two groups, those with a high pretest probability of LTBI, and those at high risk of progression to active disease. Those with a high pretest probability of LTBI include close contacts with patients with untreated pulmonary TB, illicit drug users, residents or employees of homeless shelters or correctional facilities, health care workers with recent unprotected exposure to active TB, and persons from countries with high TB burdens. Those at high risk of reactivation include patients with HIV/AIDS or end-stage renal disease on hemodialysis, those initiating tumor necrosis factor-alpha inhibitors, and patients preparing for organ or stem cell transplantation. The pretest probability of LTBI in asymptomatic persons without the above risks or exposures is approximated by the local disease prevalence, which is 3% to 5% in the U.S.5 These individuals do not need to be tested for LTBI. Previously, health care workers and other high-risk professions were tested serially. However, a more recent Centers for Disease Control and Prevention guideline now recommends focused testing based on exposure risks, due to high false-positive rates in low-prevalence populations.6

The utility of IGRAs for the diagnosis of active TB is very limited. Instead, a full workup including chest radiography, acid-fast bacilli smears, nucleic-acid amplification test (when available), and cultures should be performed.

How the IGRAs work: Two types of IGRAs are commonly employed: QuantiFERON-TB Gold-Plus (QFT-GP) assays that measure interferon-gamma release; and T-Spot assays that measure the number of “spots” or the number of interferon-gamma releasing T-cells. Both tests can be reported as positive, negative, and indeterminate, in addition to the borderline category for the T-Spot assay (Figures 1 and 2). The indeterminate results typically reflect a failure of either the negative control (i.e., high background non-specific interferon-gamma release, high immunogenicity) or positive control (i.e., insufficient interferon-gamma release, due to the patient’s immunologic status or blood processing issues). These assays report continuous numerical results, which are then dichotomized into positive and negative results for simplicity. However, the dichotomy can be problematic, especially when the test results are close to the established cut points.7 A nuanced approach, discussed below, to the test interpretation may be necessary for management decisions.

Overview of the data: The reference standards for the diagnosis of LTBI are imperfect. Studies evaluating the sensitivity of IGRAs for LTBI primarily employ patients with active TB, with the culture results serving as the reference standard, as no other gold standard for the diagnosis of LTBI exists.8 Studies evaluating IGRA specificity have been performed separately in BCG vaccinated and unvaccinated immunocompetent persons. It was assumed that the asymptomatic HIV-negative participants in low prevalence TB countries were LTBI negative.8 Pooled sensitivity and specificity data from multiple meta-analyses were used to calculate the likelihood ratios (LRs) seen in Tables 1-4.8-11 Available meta-analyses examined QuantiFERON-TB Gold and Gold-In-Tube, which were phased out in mid-2018 but are similar in test characteristics to the currently available QFT-GP.12

Negative test results: For average-risk, immunocompetent hosts, a negative IGRA sufficiently reduces the probability of LTBI, and no further workup is warranted. T-Spot has higher sensitivity, but similar specificity compared to QFT-GP assays, thus a better negative LR (Table 1).8 However, providers are often limited to the IGRA that their institutions use and cannot choose between the IGRA platforms. When available, T-Spot may be considered the test of choice for patients with a higher pretest probability of LTBI.

The sensitivities of all IGRAs and TST are lower among the HIV-infected population than the general population, especially when CD4 count drops below 200 cells/mm3 (Table 2).9,10 Anergy can be caused by HIV/AIDS, protein-calorie malnutrition, use of immunosuppressants, and other immunocompromising conditions, and may lead to higher rates of indeterminate and false-negative IGRA results.3 Since immunocompromised patients have a higher likelihood of progressing to active disease, obtaining a repeat IGRA may be warranted after a first negative test. If the initial test of choice was QFT-GP or TST, a repeat test with T-Spot, when available, may be reasonable given the higher sensitivity (45-60% versus 76%, respectively). 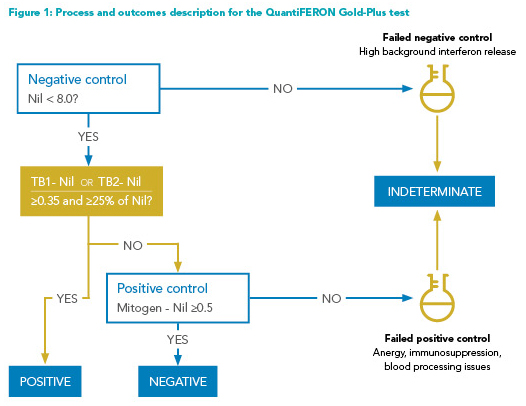 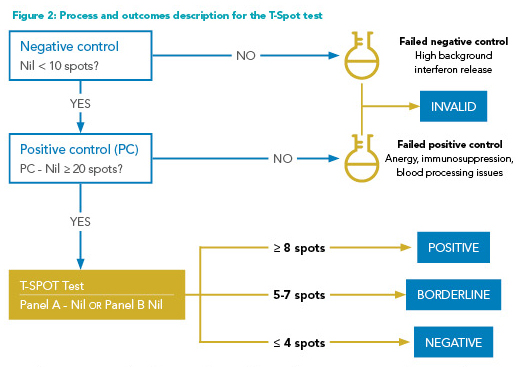 Indeterminate results: Indeterminate results, caused by the failure of positive or negative controls, are more frequent among immunocompromised patients. Immunological anergy can cause insufficient responses to positive controls (Figures 1 and 2).3 Prolonged incubation time (delayed processing) and excessive blood volume in test tubes may falsely lower the interferon response to positive controls. Meanwhile, excessive tube shaking, inadequate blood volume, and incorrect order in which blood is drawn into the tubes may falsely elevate the response to negative controls. T-Spot assay also has a “borderline” test result category, defined as the presence of five to seven spots (Figure 2). Patients with this test result have adequate negative and positive controls, but the interferon response does not appear sufficiently strong to be labeled as “positive.”

Therefore, indeterminate tests should generally be repeated. If repeated testing continues to be indeterminate, and pretest probability or risk of progression is high, empiric workup of active TB or further monitoring for LTBI should be considered.

The approach differs for persons with a lower probability of LTBI and a lower risk for progression to active disease. False-positive results may be frequently seen in populations with low LTBI prevalence.13 Among U.S. health care workers who converted to a positive IGRA during serial testing, more than 70% reverted to a negative six months later in one study.14 Several reasons account for such a finding. First, a highly specific test in low disease prevalence states will still produce many false positives. When using a test with 95% specificity in a population with 3% disease prevalence, a positive test result will more often be a false positive than a true positive. Second, many IGRA test-processing errors discussed above can either lower or increase the interferon response falsely.15 Third, the thresholds that define IGRA positivity are somewhat arbitrary.  Many positive results may cluster just above the chosen cut point (i.e., 0.35 IU/mL for QFT-GP) and may revert to negative due to IGRA result variability. Therefore, laboratory-provided quantitative results can aid in qualitative test interpretation. A positive test result demonstrating an interferon response of 10 IU/mL above nil is more likely to be a true positive than a positive result with an interferon response of 0.37 IU/mL above nil (normal <0.35 IU/mL). In a small study evaluating QuantiFERON-TB Gold-in-Tube variability, the majority (80%) of positive samples that reverted to negative had interferon response between 0.35 and 0.80 IU/mL above nil.16 Routine inclusion of the quantitative IGRA results by laboratories may aid clinicians to make these nuanced decisions.

Diagnosing active TB: Given the occasional difficulty of obtaining lower respiratory samples for active TB testing, studies have examined whether a positive IGRA is predictive of active TB. A meta-analysis found IGRAs to have low specificity and inadequate positive LR; thus, they cannot substitute for a full evaluation for active TB in immunocompetent hosts (Table 3).8,11 The LRs for both positive and negative tests for active TB in immunocompromised hosts are close to one (Table 4); thus, the utility of IGRAs in this population is very low.10 Every effort needs to be made to obtain adequate samples to evaluate for active TB, including induced sputum and flexible bronchoscopy.3 If the probability of active TB is high, empiric anti-tubercular treatment may be started.

Application to the original case: It was appropriate to order the IGRA as part of the initial workup for LTBI for the immunocompromised patient. Given the indeterminate result, the test should be repeated. If the repeat IGRA is positive, evaluation for active TB should be undertaken by symptom assessment and chest imaging, and if appropriate, an active TB workup should be completed. If the repeat test is negative and the risk of progression to active disease is high, the provider may still consider periodic monitoring for active TB symptoms.

Bottom line: Interpret negative or indeterminate results cautiously in immunocompromised patients. Similarly, positive test results in those with a low pretest probability of LTBI should be treated with skepticism and repeated.

An asymptomatic health care worker comes in for LTBI testing after recent high-risk exposures. Her IGRA test returns positive. What is the most appropriate next step?

a. Repeat the IGRA test

b. Proceed to induced sputum for AFB smear and culture

Correct answer: C. Although this patient likely does not have active TB in the absence of symptoms, individuals with a higher pretest probability for LTBI (given her recent exposures) with a positive IGRA test should get a chest radiograph to evaluate for pulmonary TB (choice C). Such a step helps exclude the presence of active TB before the initiation of LTBI treatment (choice D). If the patient has symptoms of active TB, or there is radiographic evidence of active TB, sampling for active TB (choice B) must be pursued. A positive IGRA result typically does not need to be repeated in patients with a high pretest probability of LTBI but can be repeated in persons with low pretest probability when there is a concern for false-positive results (choice A). 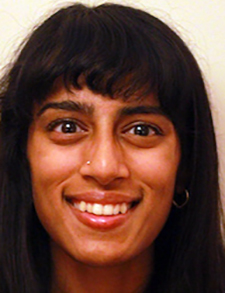 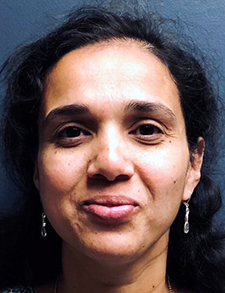 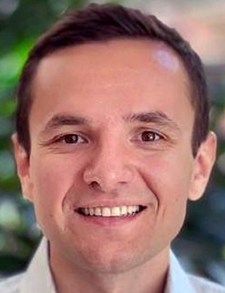 Dr. Chockalingam is a resident physician of internal medicine at the University of Colorado School of Medicine, Aurora, Colo.

Dr. Chauhan is an assistant professor of medicine, division of infectious diseases, department of medicine at the University of Colorado School of Medicine, Aurora, Colo.

Dr. Baduashvili is an associate professor of medicine, division of hospital medicine, department of medicine at the University of Colorado School of Medicine, Aurora, Colo.