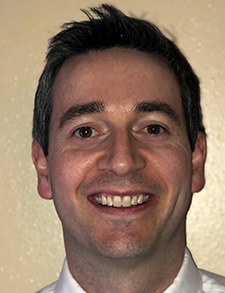 Case A 40-year-old male with depression, post-traumatic stress disorder, and chronic pain presents with somnolence and a respiratory rate of 10 breaths per minute that responded to naloxone in the field. The patient’s outpatient prescriptions include sertraline, prazosin, and as-needed hydrocodone. The urine drug screen (UDS) is positive for opiates and benzodiazepines. 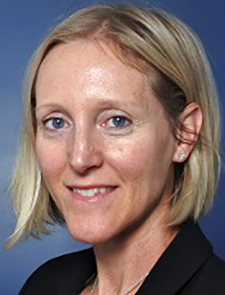 Brief overview Although UDS is commonly ordered and easy to perform, interpretation isn’t straightforward and misinterpretation is common.1 Toxicology literature cites significant limitations to the UDS, both diagnostic and management-related.2 The simplicity of “positive” and “negative” can mislead clinicians into overlooking other clinical scenarios that can fall into those two categories. This has significant implications for medical diagnosis and decisions. 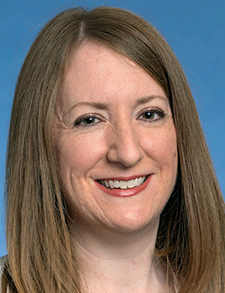 The UDS is frequently used in the acute care setting. Emergency department (ED) clinicians may use the UDS in the initial assessment of patients presenting with a severe overdose, acute encephalopathy, psychosis, and other toxidromes. Hospitalists safely transition patients from their early management of a suspected overdose back to the outpatient setting through careful medication reconciliation and the diagnosis of substance use disorders. Hospitalists also work collaboratively with outpatient prescribing clinicians regarding the ongoing prescription of opioids or sedative-hypnotic drugs. Therefore, it is important to understand the diagnostic characteristics and interpretation of the UDS to make the best possible clinical decisions for the patient.

Overview The UDS commonly used in the acute care setting is an immunoassay, which uses antibodies to detect a drug and/or its metabolites. A negative result doesn’t necessarily mean the drug is absent, it means the amount present is below the cut-off level for detection. A positive result means the immunoassay has detected a substance of a similar chemical structure to the screening target. Detection time is the time since ingestion during which the drug or its metabolites will be detected by the immunoassay.1 This can vary significantly between drugs of the same class and is important to consider when interpreting a UDS. For example, long-acting benzodiazepines may be detected up to 30 days, whereas short-acting benzodiazepines may be detected for up to three days.1

Most immunoassays for opiates (non-synthetic, natural opiates) use antibodies to morphine to set the threshold for a positive versus negative screen. Both codeine and heroin are opiates that get metabolized to morphine. (Figure 1) Semisynthetic opioids (e.g., hydrocodone, hydromorphone, and oxycodone) and synthetic opioids (e.g., fentanyl, meperidine, tramadol, and methadone) may not be detected as “opiates” on the standard UDS since the antibodies for morphine may not cross-react with these substances.1 Immunoassay and gas chromatography/mass spectrometry (GC/MS) testing for semisynthetic or synthetic opioids are available, but the Centers for Disease Control and Prevention (CDC) guidelines recommend using these costly tests only in circumstances where detection of specific opioids would alter patient management.3 An exception to this is fentanyl. Given the recent epidemic of fentanyl overdoses, it’s essential to know if the sensitive and specific fentanyl immunoassay is available in one’s own institution as it may be a separate test from the standard opiate screen. 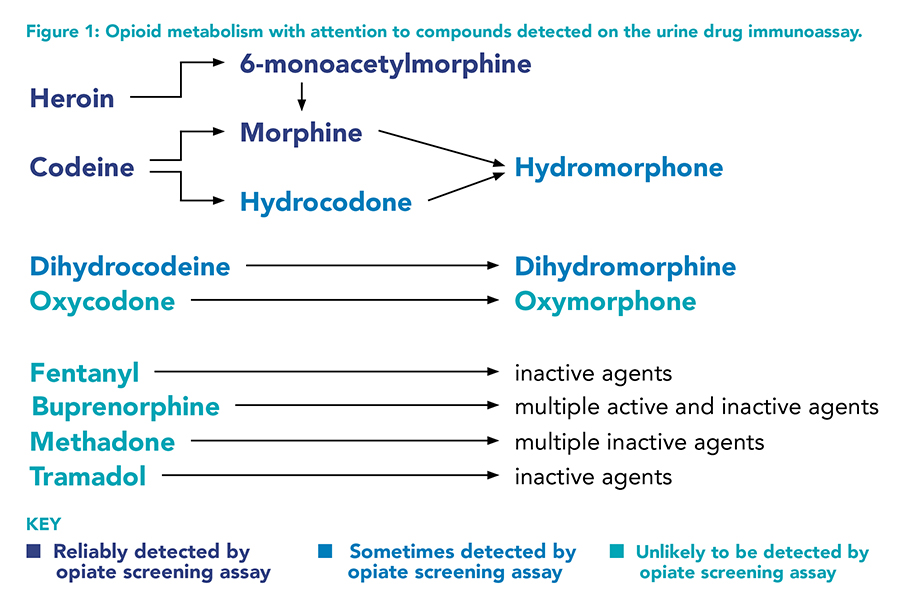 Appropriate interpretation of the common opiate UDS is critical, as misinterpretation of a “negative screen” could result in a diagnostic error and may generate mistrust in a patient’s opioid use, which can have consequences for the ongoing management of chronic pain and the patient-physician relationship.4 As an example, a negative opiate screen would not rule out an opioid overdose if a patient is using synthetic or semisynthetic opioids. Similarly, a negative opiate screen does not imply non-adherence or diversion in a patient prescribed these types of opioids or if the patient is taking an opiate at a low dose or on an as-needed basis. Additionally, false-positive opiate screens are rare but have been reported with the use of quinolones and rifampin.5

Benzodiazepine screen interpretation can be challenging due to the large number of benzodiazepines available, their complex metabolic pathways, and their variable half-lives. Further, several different immunoassays are available, and institutions may vary in which assay they use. For example, earlier-generation assays that detect the free or non-conjugated forms of oxazepam or nordiazepam would not detect commonly used benzodiazepines that are metabolized via an alternate pathway, such as lorazepam, alprazolam, and clonazepam.1 Some later-generation assays have improved detection rates of alprazolam, but may only detect metabolites of clonazepam, temazepam, and lorazepam at high levels, leading to false negatives, especially with shorter-acting benzodiazepines.1,6 (Figure 2) Benzodiazepine false positives can also occur with common medications such as sertraline or efavirenz.5 Benzodiazepines are commonly administered in the ED and pre-hospital setting to patients with suspected stimulant intoxication, psychosis, or alcohol withdrawal. Therefore, appropriate interpretation of the benzodiazepine screen requires a review of medications administered prior to arrival, thorough medication reconciliation, and a knowledge of which immunoassay is used at one’s institution. 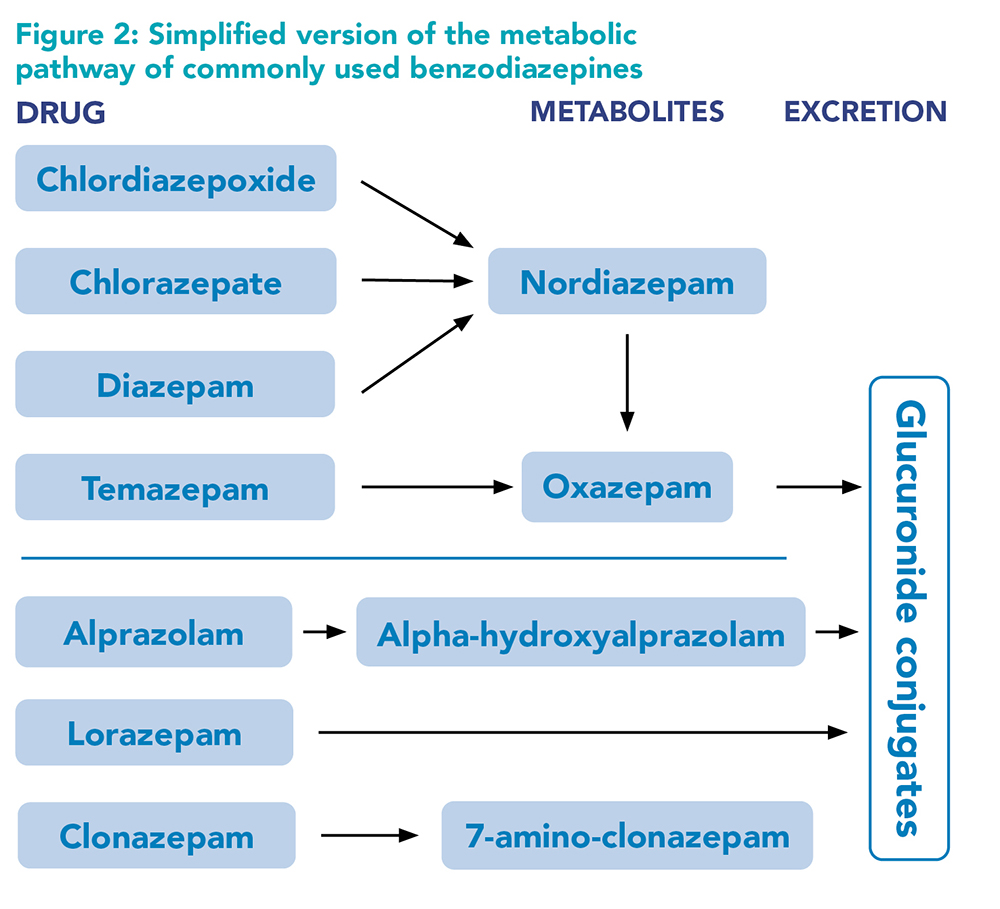 The amphetamine immunoassay is nonspecific for amphetamine and methamphetamine because the assays cross-react with many medications of similar molecular structure. Positive amphetamine screening tests shouldn’t be used in isolation for major clinical decision-making. Patients who screen positive should be questioned about the use of these other agents. The long list of agents associated with a false-positive UDS for amphetamine includes pseudoephedrine/ephedrine, bupropion, labetalol, ranitidine, and dietary supplements containing dimethylamylamine (DMAA).1 If suspicion of amphetamine use remains high and if positive results would have major treatment implications, confirmatory testing could be performed with GC/MS.

Cocaine urine assays detect benzoylecgonine, the primary metabolite of cocaine.1,5 Urine cocaine screens are highly specific for detecting recent cocaine ingestion, and false positives are exceedingly rare due to the lack of cross-reactivity with other substances. It’s important to note that topical and ophthalmic anesthetic preparations containing cocaine are clinically available and can cause positive UDS results.1

Interpretation of the UDS in patients prescribed chronic opioids or benzodiazepines can present unique challenges. Misinterpretation of UDS results may lead hospitalists to believe a patient is misusing a prescribed drug. The suspicion of misuse may negatively affect how the patient’s symptoms are managed by clinicians.4,5 Abnormal UDS results should prompt further discussion and evaluation. It may not be reasonable to make significant changes to a chronic treatment plan based on a single result. Seek more information to guide management decisions including the patient’s self-report of use, Prescription Drug Monitoring Program (PDMP) data, input from the outpatient prescribing clinician, screens for additional illicit substances, and patterns of behavior (e.g., multiple visits due to complications from medication misuse). Confirmatory testing with GC/MS can be ordered in cases where either the diagnosis is unclear or confirming the presence or absence of the drug would alter future prescribing. The turnaround time for confirmatory testing is significantly longer; in our institution, it takes two days. This may limit the utility of GC/MS in the acute care setting; however, confirmatory testing may aid the outpatient prescribing clinician in addressing concerns of misuse or in making changes to home medications.

This patient’s immediate clinical response to naloxone is highly suggestive of opiate or opioid intoxication. The UDS was positive for both opiates and benzodiazepines. Hydrocodone, a semisynthetic opioid, is not detected on the UDS for opiates. Therefore, the positive opiate screen is concerning for comorbid use of another opiate such as heroin, morphine, or codeine. The positive benzodiazepine screen may be a result of the patient’s sertraline therapy or benzodiazepine use. A follow-up conversation with the patient and/or family, or a review of PDMP may suggest the specific substances ingested without the need for expensive confirmatory testing. Confirmatory drug testing could be performed if the clinical scenario remains unclear or if the results will influence future prescribing.

Hospitalists’ ability to accurately interpret the UDS by understanding the scope and limitations of the assay at their individual institutions is essential both for diagnosis and for transitions of care.