For years, there’d been talk of starting a Rhode Island chapter of SHM.

Sure, hospitalists in the smallest state in the country could have hopped state lines to join a chapter in Boston or Hartford, Conn.

But that’s not who Rhode Islanders are. 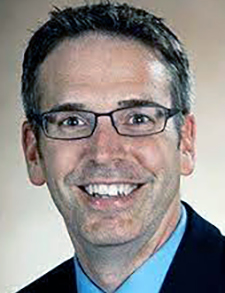 “We really feel a strong sense of community and that our state is important,” said Brad Collins, MD, SFHM, an associate professor of medicine at the Warren Alpert Medical School of Brown University in Providence, R.I. “Sometimes it might be easier to merge with the Boston chapter or the Massachusetts or Connecticut chapters, but there’s a strong sense of self in Rhode Island. Of wanting to have our own independent chapter.”

And that’s how SHM’s newest chapter got started in the summer of 2021.

It has 66 members and already has enough gravitas that Dr. Collins and colleagues were able to dine with Governor Dan McKee. In September, the group hosted hospitalist pioneer Win Whitcomb, MD, MHM, to discuss the future of the field. In November, director-at-large Hussain Khawaja, MD, helped organize a New England-area poster competition where Rhode Islanders won the categories of research, innovations, and clinical vignettes. All will attend and participate in the national Scientific Abstract Competition taking place during SHM’s Converge 2022.

“It was fun to see that,” said Dr. Khawaja, who practices at two Providence hospitals staffed by Lifespan. “People were so excited to be a part of the organization.”

Being part of something was one of the motivations to start the chapter last year, Dr. Collins said.

“Given the stress hospitals are under with capacity due to COVID, but also in general, having shared experiences matters,” he said. “Trying to come up with good plans that involved hospitalists, to make sure we have a united voice at the state level, and making sure we have advocacy for the needs we have as a subspecialty—all of that was extremely important to us.

“Being a small state, Rhode Island is very parochial, but it also gives us an opportunity to make some large changes from an advocacy standpoint. By having a local chapter, we can effect change in that way.”

Sometimes the value of a local chapter is just knowing that another hospitalist is enduring the same struggles, Dr. Khawaja said.

“In a lot of ways, it’s very settling to see we’re not the only ones going through it,” he said. “Physicians everywhere are feeling the same things, the same pressures, the same burdens, and the same degree and type of burnout because we’re all going through the same thing at the same time. Having local, regional, and national platforms to discuss these things has been very helpful.”

And discussing those struggles with folks who understand local nuances—Ocean State mask and vaccine mandates, for example—makes those conversations even more valuable, Dr. Collins said.

“Landscapes are just different across the country. We share the experience of a sustained pandemic nationally, but to be someone who also knows the ins and outs of the landscape of Rhode Island in health care, just means a little bit more. So, while I may connect with someone in California via Twitter or Facebook, we can meet in outdoor spaces here and really actually have that personal, human connection, outside where it is safe, or masking when we have met in person.”

One of the challenges of a new chapter is keeping up activities to keep members engaged.

Dr. Collins said the chapter already has three meetings on the books for 2022. The first, this spring, will be a physician town hall of sorts where advocacy concerns will be discussed. The second will be a social event—a wine tasting at a local winery, complete with a jazz band—during the summer. In September, they’ll hold the chapter’s second annual meeting, with a local poster competition.

“We’re partnering with the Rhode Island Medical Society and the American Academy of Family Physicians to help host an advocacy day,” Dr. Collins said. “We’ll have speakers from Rhode Island’s General Assembly. We’ve had people from our federal congressional delegation at these past events. I don’t know who will be featured, but it’s sort of how the sausage is made and how to advocate to get your bills on the floor. I think that will be really important for us as we shape our agenda politically to make the changes we need to make. We can really effectively do those things at a state level. Again, it’s much easier because we are a small state.”

Put another way? Small, but mighty.

“That seems to be Rhode Island in general,” Dr. Collins said. “Hopefully, by having the opportunities to have these meetings people will know their voice is heard and that change can come from this for the better. I think we’ll continue to attract new members and our chapter will be something people are excited to be a part of.”

Interested in joining your local chapter? Learn more at SHM.