A 32-year-old man with history of intravenous heroin use presents to the emergency department (ED) for fevers and redness with purulence over the left forearm. He is started on IV vancomycin and admitted for purulent cellulitis with sepsis. The ED checks a rapid human immunodeficiency virus (HIV), hepatitis C antibody, and syphilis enzyme immunoassay (EIA). The syphilis EIA comes back reactive. Is further testing necessary? Does he require treatment for syphilis?

Brief overview of the issue

Syphilis is a sexually transmitted, infectious disease caused by the bacterium Treponema pallidum. Symptoms correspond to the four stages of infection.

The manifestations of syphilis are often non-specific and may progress if the disease is not identified and treated. Early diagnosis of syphilis is particularly important in HIV-infected patients as they may progress to tertiary syphilis in six months.

Risk factors for acquiring syphilis include HIV infection, history of syphilis, and more than four sex partners in the preceding year. Higher prevalence rates are associated with certain sociodemographic groups including young adult men, sex workers, men who have sex with men, and individuals who are black or live in metropolitan areas in the southern and western United States.2

Many institutions and clinical laboratories are moving away from the traditional syphilis testing algorithm that begins with a nontreponemal test (e.g., rapid plasma regain (RPR) or venereal disease research laboratory (VDRL)) and instead they’re using the reverse screening algorithm which starts with a treponemal test (e.g., EIA; chemiluminescence immunoassay (CIA); or multiplex flow immunoassay (MFI)).

Overview of the data

The definitive method for diagnosing syphilis is visualizing the Treponema pallidum bacterium using darkfield microscopy or direct fluorescent antibody testing. These tests are not widely available; therefore, diagnosis predominantly relies on serology. The current standard method for diagnosing syphilis uses a combination of clinical history and serologic testing. There are two types of serologic tests available for syphilis: nontreponemal and treponemal tests. Both types of tests are needed to confirm the diagnosis. The order of testing is by either the traditional syphilis testing algorithm or the reverse algorithm.

The traditional algorithm for diagnosing syphilis starts with a screening nontreponemal test, such as the RPR, and verifies positive results with a confirmatory treponemal test, such as fluorescent treponemal antibody absorption (FTA-ABS) or T. pallidum particle agglutination assay (TP-PA). The traditional algorithm, however, often misses early primary syphilis since the RPR can take up to four weeks to become positive and can also fail to identify latent or tertiary disease because antibody levels wane over time. In addition, the RPR can be positive due to conditions other than syphilis such as autoimmune disorders, particularly systemic lupus erythematosus. From a clinical laboratory perspective, the traditional algorithm is labor-intensive, involves subjective interpretation by laboratory technicians, and has a slow turnaround time.3

Due to increasing automation and lower processing cost, more clinical laboratories and institutions have adopted the reverse testing algorithm which screens first with a treponemal test (e.g., EIA, CIA, or MFI).4 Reactive sera are then sent for a confirmatory nontreponemal test (usually RPR). A recent study found the sensitivity for EIA testing (Trep-Sure EIA) to be 98.5% with a specificity of 82.6% in a low-prevalence population for most stages of syphilis (primary, secondary, and early/late latent).5

A prospective cohort study from the U.S. (n = 1000 samples) compared traditional screening to the reverse-algorithm strategy using MFI in a low-prevalence population. Fifteen samples reacted when screened with MFI compared to four samples that reacted with RPR as the initial test (1.5% versus 0.4%, P = .01). All four samples that were positive by RPR were also identified as positive by MFI. Although the reverse screening strategy yielded a higher false-positive rate than traditional testing (0.6% versus 0%, P = .03), two patients with latent syphilis identified by the reverse screening algorithm went undetected when screened with the traditional algorithm.2 Similar findings have been demonstrated in other studies comparing traditional screening with RPR to the reverse-algorithm strategy using EIA.6

As more clinical laboratories adopt reverse-sequence screening, clinicians may encounter discordant results such as a positive EIA/CIA/MFI followed by a negative RPR. To distinguish between a falsely reactive screening result and true infection, the Centers for Disease Control and Prevention (CDC) recommends a second treponemal-specific antibody test, such as TP-PA, that is different from the initial screening test.7 If the TP-PA is negative, the screening result is likely a false positive. A positive or indeterminate TP-PA is suggestive of previously treated syphilis, latent syphilis, or early syphilis. These results require clinical correlation with a person’s sexual history and symptoms to assist with interpretation.

A retrospective study in the U.S. reviewed 21,623 CIAs as the initial syphilis test. A total of 439 (2%) yielded positive results, and 255 of these (58%) were followed by a negative RPR result. All patients with discordant syphilis serology results underwent TP-PA confirmatory testing, with 72% testing positive. CIA positive, RPR negative, and TP-PA positive patients were more likely to have risk factors for syphilis than those who tested TP-PA negative, a pattern which persisted after excluding patients with a known history of syphilis. The CDC recommends that patients who are EIA/CIA positive, RPR negative, and TP-PA positive are assessed for exposure to and signs and symptoms of syphilis, staged, and offered stage-appropriate antibiotic treatment if not previously treated.8

Application of the data to our original case

The patient’s EIA was reactive. Using the reverse sequence algorithm (see Figure 1), a quantitative RPR was checked and was non-reactive. This discordant result of a reactive EIA and nonreactive quantitative RPR led to testing with a second treponemal test, TP-PA, which was reactive. Further history was negative for any recent syphilis exposure or history of prior treatment, and clinical evaluation did not find any signs or symptoms of early disease. Therefore, the patient was treated for late latent syphilis per the CDC guidelines.

Since syphilis EIA testing is highly sensitive, it is prone to false positives when screening a low-prevalence population. A reactive EIA requires further testing to discriminate between a false positive and a true positive.

Using the reverse algorithm, +EIA, -RPR, +TP-PA (see Table 1) in the absence of recent syphilis exposure, prior treatment, and clinical signs of early disease is most consistent with late latent syphilis, which requires treatment.

A 56-year-old male is admitted to the hospital for treatment of community-acquired pneumonia. The ED resident decides to screen for syphilis. The syphilis EIA returns negative the next day. The patient reports no sexual activity in the past six months. He has no symptoms or exam findings that suggest syphilis. How do you counsel the patient regarding this lab result?

Correct answer: 3. Because the treponemal EIA test is highly sensitive, false negatives are unlikely. And, because the patient hasn’t had any sexual partners in the last six months, it is also unlikely that the negative EIA is missing a case of early syphilis. No further testing or treatment is recommended.

You triage a 22-year-old female who was admitted overnight for management of an ulcerative colitis flare. While reviewing her recent lab results, you notice she had a treponemal EIA screen sent after a recent visit to her primary care physician (PCP) which returned positive. The patient was unaware of this test result and is concerned about the implications. She reports that her PCP recommended the test as routine screening. She has been monogamous with one female partner for the last year. She has not noticed any clinical symptoms aside from those related to her inflammatory bowel disease. You recently learned about the reverse treatment algorithm for diagnosing syphilis, so you send off additional tests. Both the RPR and TP-PA return non-reactive. What do you tell the patient?

Correct answer: 1. The fact that both the RPR and TP-PA were negative indicates that the positive EIA was most likely a false positive. Her clinical history and exam are not suggestive of early syphilis. No treatment is necessary. If clinical history were concerning for early syphilis, consideration of empiric treatment and repeat EIA testing in two to four weeks is recommended.

You are called by the ED to admit a 22-year-old male who presented with a rash. Physical exam shows diffuse papules involving the trunk and extremities, including the palms and soles. You are concerned about secondary syphilis and decide to test using the reverse algorithm. Which results would confirm the diagnosis?

Correct answer: 3. A positive screening EIA followed by a positive non-treponemal RPR in a patient with a rash characteristic of secondary syphilis is consistent with a diagnosis of untreated syphilis. In this case, it is unnecessary to send a second treponemal test (such as TP-PA) since the initial two serologic tests were both positive.

A 54-year-old female was admitted after a syncopal event that resulted in a humerus fracture. The ED tested for sexually transmitted infections, and she had a positive EIA and RPR with a titer of 1:2. On further questioning, the patient reports she was treated for primary syphilis six months ago at a different hospital. You call the public health department for more information and learn that the patient’s previous RPR titer was 1:32. The patient requests another course of treatment because she is concerned that the tests are still positive. She denies any clinical signs or symptoms of primary syphilis and has not engaged in sexual activity since her last course of treatment. How do you proceed?

Correct answer: 2. Patients who demonstrate at least a four-fold reduction in the RPR titer after treatment, along with a resolution of any clinical symptoms, are considered to have been treated adequately. 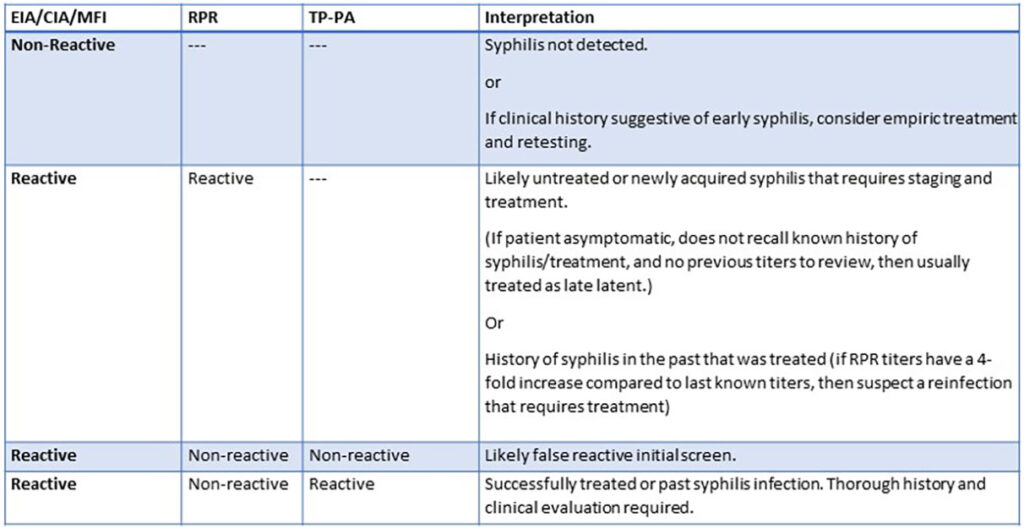 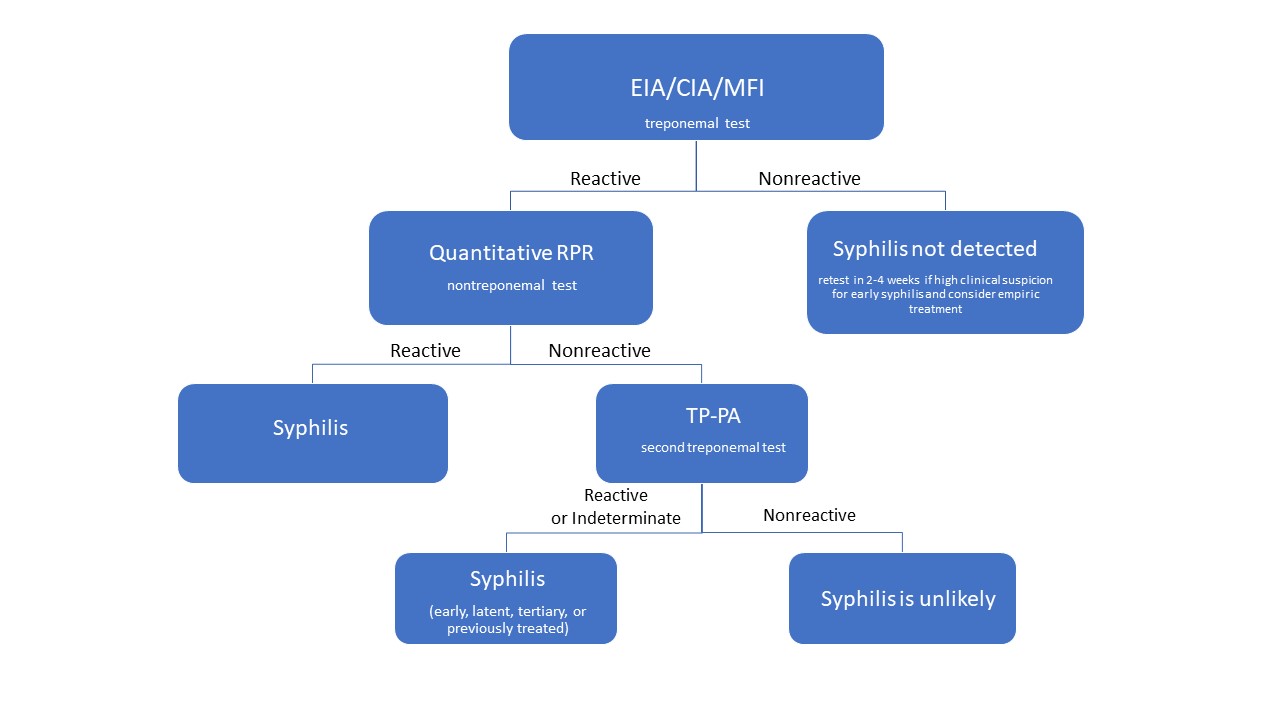 Dr. Meghan Sebasky is a clinical professor in the division of hospital medicine, department of medicine at the University of California San Diego School of Medicine, San Diego.

Dr. Ali Farkhondehpour is an assistant clinical professor in the division of hospital medicine, department of medicine at the University of California San Diego School of Medicine, San Diego.

Dr. Annie Cowell is an assistant clinical professor in the division of infectious diseases, department of medicine at the University of California San Diego School of Medicine, San Diego.